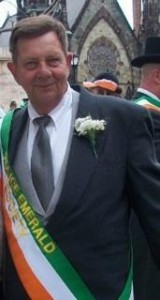 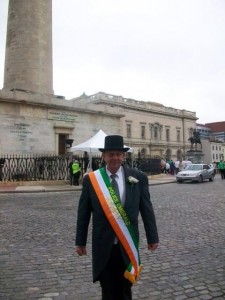 Friendly Sons,
The obituary and arrangements for Ed Snediker III are below.  Please wear your green jackets!
Edward F. Snediker III passed away on August 29, 2014 at his home. Born in Bronx, NY, he was the son of the late Edward F. Snediker Jr. and Helen J. Eagan Snediker. He was a veteran of the U.S. Coast Guard where he served as Petty Officer 3rd Class. He worked as a police officer for the Baltimore City Police Department from 1976-1981 and for CSX from 1982-1987. He owned and operated Bayview Investigations in Perry Hall from 1993-2000 and worked as a private investigator for the MVA from 2004 to the present. He had an incredible sense of humor and loved the Coast Guard, police service and all things Irish. In 2010 he was honored and proud to serve as Grand Marshall of the Baltimore St. Patrick’s Day Parade.
Mr. Snediker is survived by his sons, Edward F. Snediker IV of Summit, NJ and Benjamin Smith of Parkville; sister, Diane Memoli of Plainview, NY; and grandson, Isaiah Smith of Parkville.
Arrangements for Wednesday, September 3, 2014:
Visitation: McComas Funeral Home, Abingdon 1317 Cokesbury Rd. Abingdon, MD US 21009 – 2 to 4 PM & 7 to 8 PM
Service: McComas Funeral Home, Abingdon 1317 Cokesbury Rd. Abingdon, MD US 21009 – 8:00 PM
If you are coming from the north, please be aware that Philadelphia Road is closed just south of Route 543. Please use exit 77 on 95. Follow it east then turn left on Philadelphia Road.
Irish Wake: Sean Bolan’s, 12 South Main Street, Bel Air, MD – 9:00-10:00 PM      By Police Emerald Society, Irish Charities of Maryland, and Friendly Sons of St. Patrick